MOSCOW – The Pitkin Nursery located on the University of Idaho campus in Moscow grows student careers, and trees needed for the Idaho industry.

Sedges and willows, black cottonwood, and bullrushes grow from the loamy soil along central Idaho’s Lower Red River. The diverse vegetation hides the stream in places, and it leaps to life each spring with the songs of migrating and nesting birds. Denny Dawes remembers when the river looked more like an irrigation ditch.

Dawes owns a Wildlife Habitat Nursery near Princeton, a business he started as a student in the late 1990s while working at the University of Idaho’s Franklin H. Pitkin Forest Nursery and seeking an undergraduate wildlife degree.

“A professor told me that riparian plant species were in demand and that growing them could be a flourishing business,” Dawes said.

Working at the Pitkin nursery, Dawes learned the skills to grow tree seedlings and culture them into the viable products that make forests. Since then, Dawes, and dozens of other U of I natural resource students, have applied experiences gleaned at Pitkin nursery, such as cultivating, growing, packaging, and selling plants on an industrial scale, to fashion careers in the nursery industry.

As a U of I student, Dawes learned that the nursery skills necessary to cultivating trees could be applied to riparian vegetation, the plants that grow in wet areas along rivers and lakes. These species were in short supply for restoration and rehabilitation projects around the Inland Northwest.

Dawes was a nontraditional student with a young family to provide for and he took the skills he learned at Pitkin and started a greenhouse, Wildlife Habitat Nursery. He focused on selling plants for a restoration project southwest of Elk City.

There the Red River gutted almost a century earlier by industrial gold mining, was being rehabilitated with state and federal funding. Dawes’ plants became the project’s centerpiece.

“Sometimes opportunity knocks,” Dawes said. “And sometimes it knocks down your door and stands on your chest.”

Over a span of 30 years, Wildlife Habitat Nursery has provided millions of plants for restoration projects throughout the Northwest in places like the Clark Fork River Delta east of Sandpoint, the Kootenai River, Musselshell River, Lolo Creek, and the Hangman Creek restoration project that runs from Idaho to Spokane County, Washington.

Dawes is among hundreds of U of I natural resource students who trained, often inadvertently, for nursery careers while earning a paycheck at the university’s Pitkin nursery.

Since graduating from U of I, many Pitkin pupils have contributed to the nursery industry, which employs 2,000 people in the Gem State and has annual state revenues exceeding $53 million. The industry contributes more than $90 million to Idaho’s economy, according to the Idaho Department of Labor.

Originally on campus, the Pitkin nursery was relocated east of Moscow in the 1950s after the then-College of Forestry purchased a 20-acre farm on the Troy Highway. The new nursery was named for Frank Pitkin who, as nursery manager from 1939 to 1979, integrated students into day-to-day operations while promoting conservation and reforestation efforts.

Pitkin shipped seedlings to county extension agents statewide throughout his tenure, a practice that continues today. When the nursery moved off-campus, Pitkin had two fiberglass greenhouses built at the new location, which has since expanded to six greenhouses with two more going online in 2022.

Bob Reggear grew up on a Christmas tree farm near Orofino and was a U of I student when Frank Pitkin, a family friend, asked for help with some nursery projects. Reggear joined Pitkin at the nursery in the late 1960s, learning to grow, package, and properly ship seedlings to extension offices, where they were distributed for reforestation efforts.

“I drove a green, one-ton U of I truck to every county in Idaho delivering seedlings,” Reggear remembers.

He later used what he learned at the university in his private nursery operations in Craigmont and Orofino.

“Working at Pitkin was probably the driving force behind my tree-farming business,” Reggear said.

Just as Dawes provides both seasonal and year-round employment to rural communities, Reggear hired nursery managers and laborers to work his tree farms.

The nursery industry, in which trees, shrubs, and a variety of garden, landscape, and habitat plants are raised commercially, is one of Idaho’s premier agriculture industries, said Ann Bates, executive director of the Idaho Nursery and Landscape Association.

“It’s among the top 10 agricultural industries statewide,” said Bates, whose organization provides outreach to would-be growers, scholarships to college-bound ag students and acts as a conduit between growers and the state government.

Idaho’s nursery industry gained momentum over the last decade, growing 56% in revenue and employment, according to the Idaho labor department.

As one of only two commercial college nurseries in the nation, Pitkin grows and sells a variety of native plants, including approximately 400,000 tree seedlings to private landowners and retailers in Idaho. It also grows seedlings for the university’s Experimental Forest, where students learn all aspects of forest management.

“Part of our mission is to provide seedlings to Idahoans for ecological restoration needs,” said Andrew Nelson, nursery director.

Nursery trees are used to replant after timber harvesting and forest fires, and nursery plants go to customers who want to develop wind rows, shelter belts, or wildlife habitats.

“We have about 1,400 customers that span across every county in Idaho, and we sell anywhere from five to 20 or more seedlings at a time, but occasionally we have larger contracts with private landowners, and we also sell to all the Western states,” Nelson said. “The vast majority go to reforestation efforts.”

Revenues from tree sales are reinvested in the nursery.

Seedling shortages across the West, especially in states hard hit by wildfires, have hampered reforestation efforts.

In Oregon alone, approximately 100 million seedlings were needed to reforest non-federal land burned in 2020. The number is more than twice what is needed in a regular year, according to the Oregon Department of Forestry’s Private Land Division.

Because seedlings have a short shelf life and are usually ordered from nurseries well before the planting season, recent large wildfires have challenged forest nurseries across the West with a demand for seedlings.

Nursery manager Shannin Murphy said seedling demand is accompanied by a need for qualified nursery administrators. A dearth of nursery managers and workers in the Pacific Northwest is preventing facilities from increasing inventory.

“The biggest issue right now is finding qualified people to run facilities,” said Murphy, who worked at Pitkin before earning a U of I forestry degree and manages an IFA Nurseries facility in Aurora, Oregon. “There is always a baseline need for tree seedlings, it’s not going to go away. There is always the need for more nurseries and qualified individuals who know how to grow seedlings.”

Training nursery workers to meet the demands of a growing industry is a challenge that speaks directly to Pitkin administrators.

“We give our student workers the opportunity to take their own initiative to learn the nursery operation,” said Don Regan, who manages day-to-day operations at the Pitkin nursery. “We give them the skills and training required to be hired by other companies.”

Training students, providing research and outreach, and growing trees and plants for reforestation and habitat are all part of Pitkin’s land-grant mission, Nelson said.

“We’re striving to meet the needs of Idahoans,” Nelson said.

How to buy a house with someone else

Wed Feb 16 , 2022
Can two people buy a house together? It’s pretty common for two people to buy a home together. And your co–buyer doesn’t have to be your spouse; you can buy with a friend, family member, or even a business partner. If you buy a home with someone else, you’ll both […] 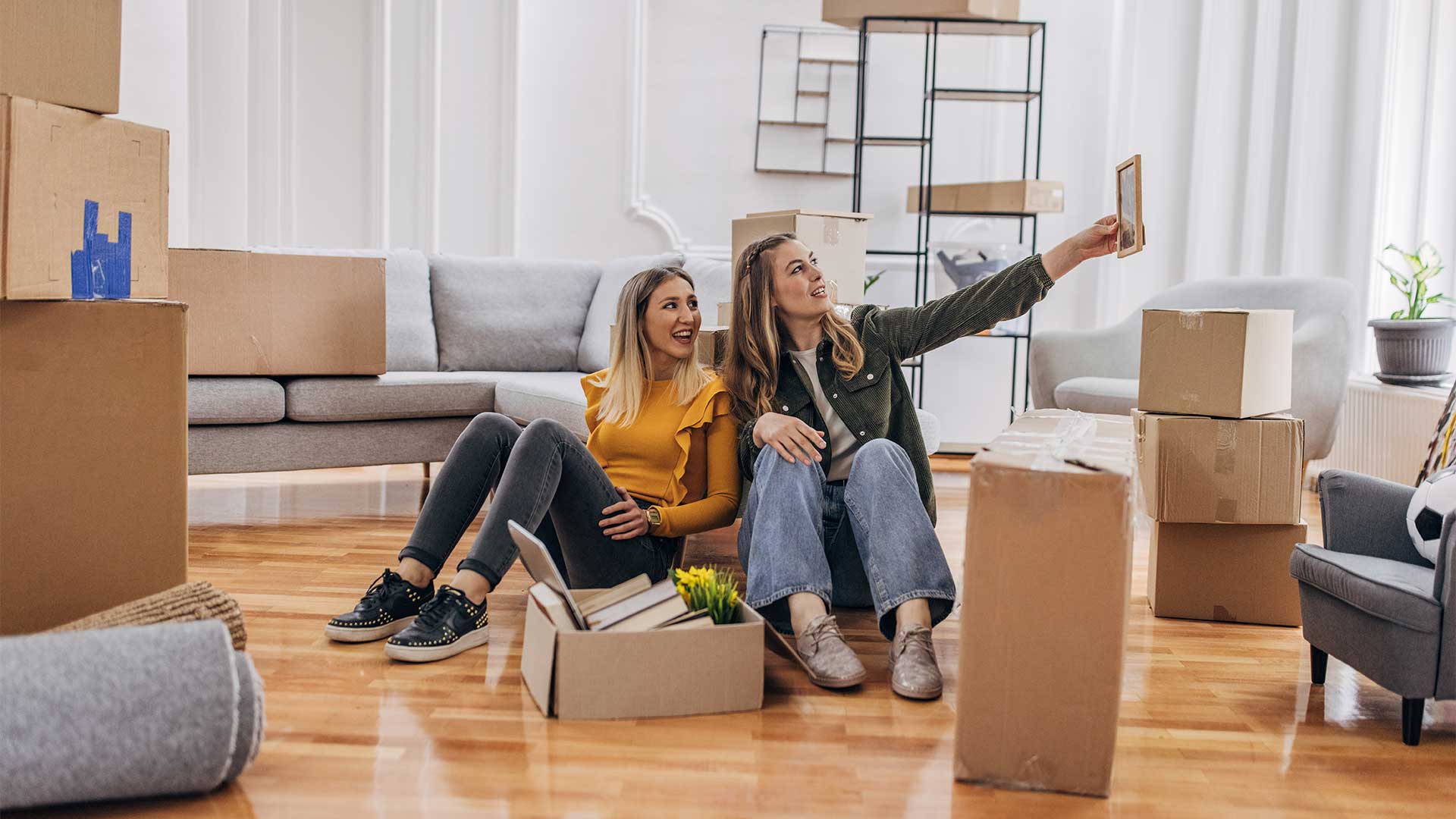