The stock market had another volatile day, but bullish investors won out in the end. With the minutes from the most recent Federal Reserve meeting apparently not containing anything that was particularly surprising, investors retained confidence that the market can bounce back from the vicious decline it has endured over the past six months. The Dow Jones Industrial Average (DJINDICES: ^DJI), S&P 500 (SNPINDEX: ^GSPC), and Nasdaq Composite (NASDAQINDEX: ^IXIC) all made solid gains on Wednesday.

Some companies in the consumer products area have seen significant declines in their share prices despite their reputation for being defensive investments. However, several of those companies have fought back by aiming to refocus their businesses on their core strengths. Starbucks (NASDAQ: SBUX) and General Mills (NYSE: GIS) made news on that score recently, as both of the food and beverage companies announced strategic divestitures designed to let them concentrate more on their best prospects for long-term growth. 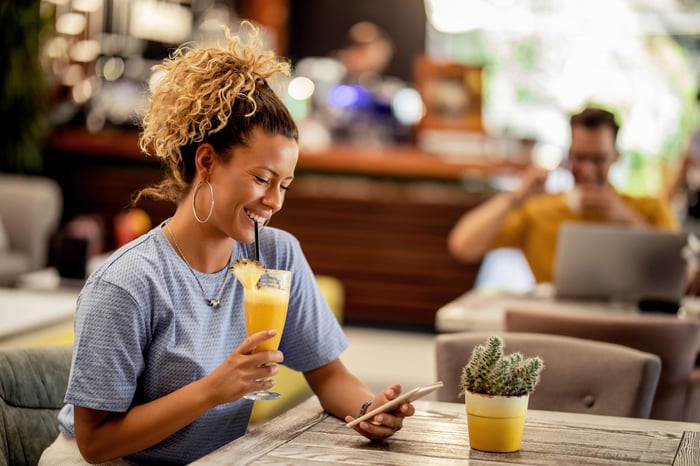 Starbucks will evolve beyond Evolution Fresh

Starbucks announced late Tuesday that it had entered into an agreement to sell its Evolution Fresh brand to privately held Bolthouse Farms. The acquisition is a natural one for Bolthouse, as that company already offers a wide array of premium juices, smoothies, protein shakes, and other products. Bolthouse, based in the San Joaquin Valley of California, is also one of the largest growers and distributors of carrots in the U.S.

Starbucks said that from its perspective, the move will help Evolution Fresh move to the next level, building on the steady progress that the brand has made in recent years. What’s evident from a strategic standpoint, however, is that Starbucks failed to get the full measure of success that it had hoped for from Evolution Fresh when it acquired the company for $30 million in cash more than a decade ago.

Shareholders didn’t see the move as material, and Starbucks’ stock moved lower by a third of a percent on Wednesday. With the share price challenging its pandemic-era lows of early 2020, the coffee giant still has work to do to convince its investors that it’s moving in the right direction.

Meanwhile, shares of General Mills were little changed during the regular session, although they moved higher by 5% in after-hours trading. The food giant made its own divestiture as it aims to go through a restructuring.

General Mills sold its Helper and Suddenly Salad brands to Eagle Family Foods Group. The cash transaction will raise $610 million for General Mills, valuing the businesses at between 2 and 3 times the $235 million in sales that the two brands combined generated in fiscal 2021.

For General Mills, the sale was the latest part of what it’s calling its Accelerate strategy. The goal is to focus on boosting its growth potential in North America by choosing the brands and categories in which it sees the best profit opportunities.

Unlike Starbucks, General Mills is trading near its all-time highs. Investors like what they’re seeing, and management’s greater focus on results could help boost financial performance going forward as well.

10 stocks we like better than Starbucks
When our award-winning analyst team has a stock tip, it can pay to listen. After all, the newsletter they have run for over a decade, Motley Fool Stock Advisor, has tripled the market.*

They just revealed what they believe are the ten best stocks for investors to buy right now… and Starbucks wasn’t one of them! That’s right — they think these 10 stocks are even better buys.

Fri May 27 , 2022
Select’s editorial team works independently to review financial products and write articles we think our readers will find useful. We earn a commission from affiliate partners on many offers, but not all offers on Select are from affiliate partners. While buying a home for the first time can be really […]