Song Kang recently spoke about the growth of his career, his quiet personality, his outlook on setting goals, and more with GQ Korea!

Regarding his currently airing drama “Forecasting Love and Weather,” the actor shared, “I’ve spent the past six or seven months with weather, and it’s hard. I thought we would just say, ‘It’s clear,’ or ‘It’s raining,’ but there’s a lot of terminology and jargon to describe weather.”

Attempting to describe Song Kang in terms of weather, the interviewer shared that he was like a comet, meaning he appeared out of the blue. Song Kang responded, “Wow, thank you. But I’m not sure that expression is correct. People around me say lots of things like that, but I believe I’ve walked a long way. I used to fail all my auditions and think, ‘Why?’ and constantly read newspapers as a result. However, I do also like that people say things like that. It’s too good for me.”

He elaborated on the newspaper bit, explaining, “It seems like everyone practices like that. So I thought I’d try it too and gave it a shot. I’d turn on my voice recorder and read an entire newspaper over one week.” 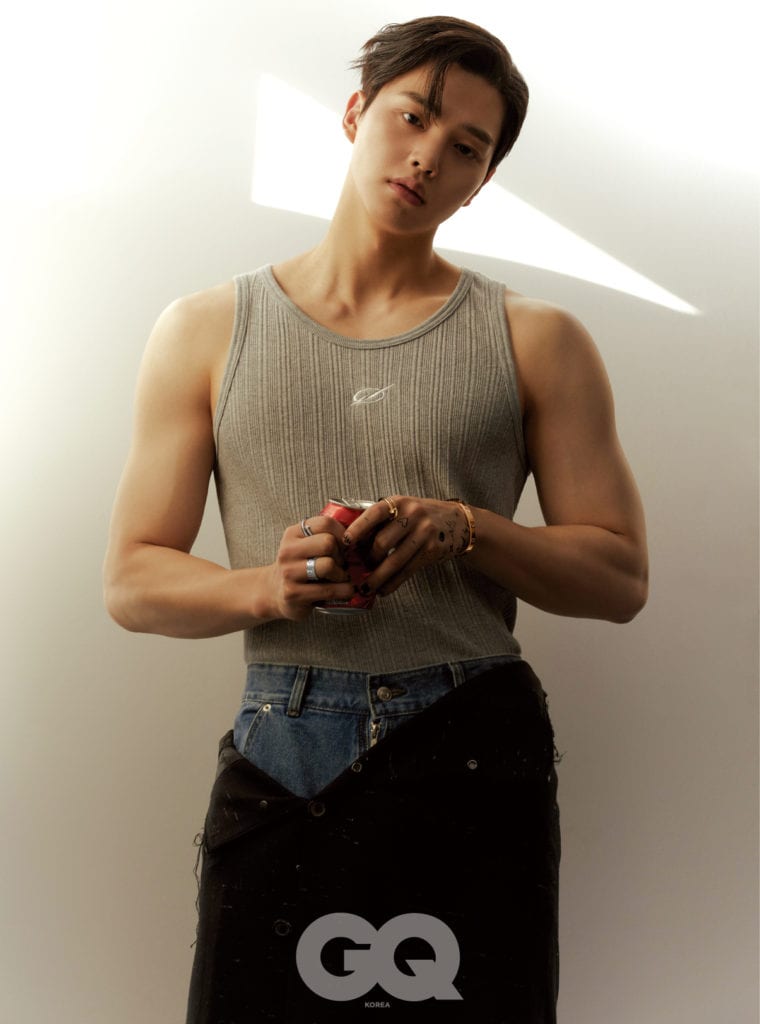 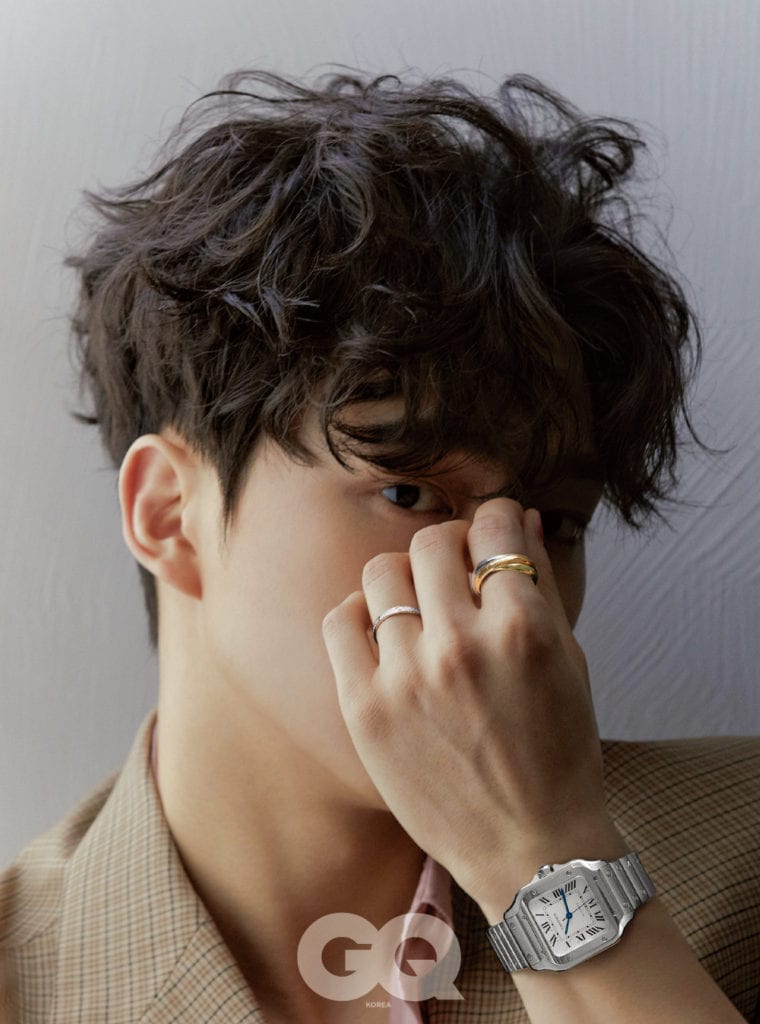 Song Kang also talked about feeling down early in his career because he didn’t understand the terminology that was being used on set. To overcome this, Song Kang shared that he made an effort to gain familiarity with those terms. He explained, “Even when I didn’t have filming, I’d still go to set and watch. This was when I was filming ‘The Liar and His Lover,’ and I’d go with my manager to watch how they were filming. At first, I watched from afar, but then the director called me over and said, ‘You can’t just watch from over there, you have to see how they act on the monitor.’ I also learned that then. I think I just tackled everything head-on, no matter what. Although I still didn’t know many things, I did become more familiar [with how things worked].”

The interviewer mentioned that Song Kang seemed much more like his characters in “Navillera” or “Sweet Home” as opposed to his characters in “Nevertheless” and “Love Alarm,” to which he responded, “Really? I always have a lot to say in my mind, but I’m constantly worried about how to bring them up. That’s why when I argue with someone, there are times when they say a lot but I can’t speak much. There are many times when I have a lot to say inside of me, but I don’t know how to say it, so I just stay still.”

Song Kang added that he’s the type to avoid conflict altogether, sharing, “I just leave things as they flow. I live just going with the flow. But I like that. Even if I get stressed, I forget about it quickly. I also forget all the words that hurt me. It’s the same for comments that were nice to hear. But I obviously remember advice. I’m the type to just leave good or hurtful words to flow by.” 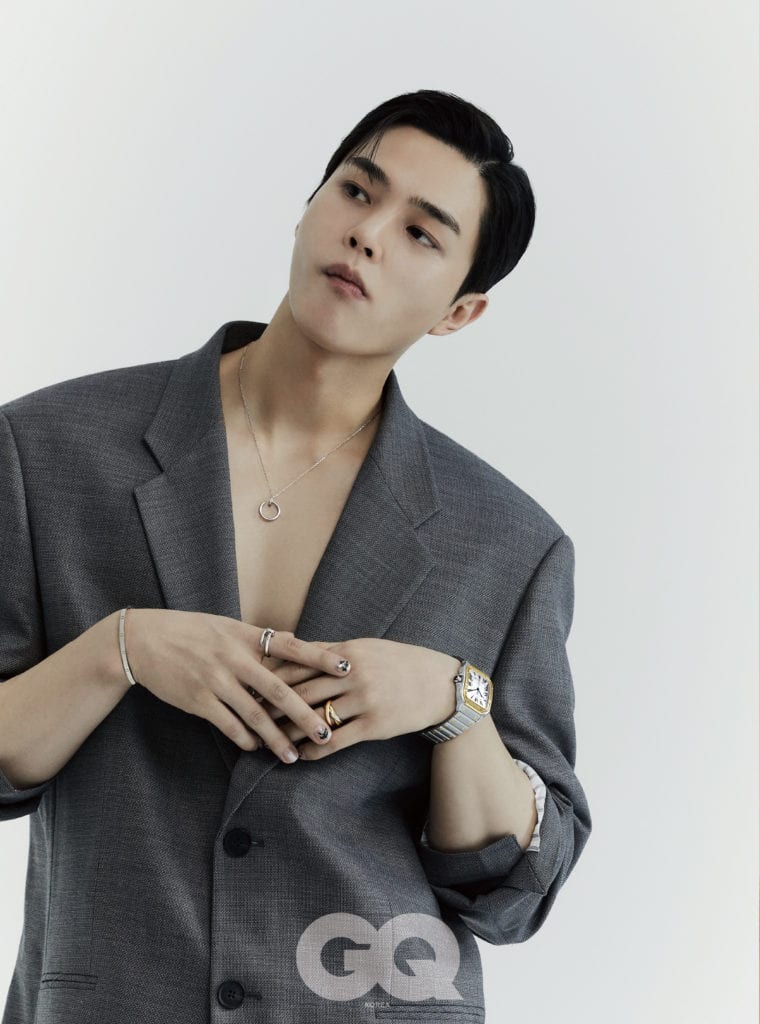 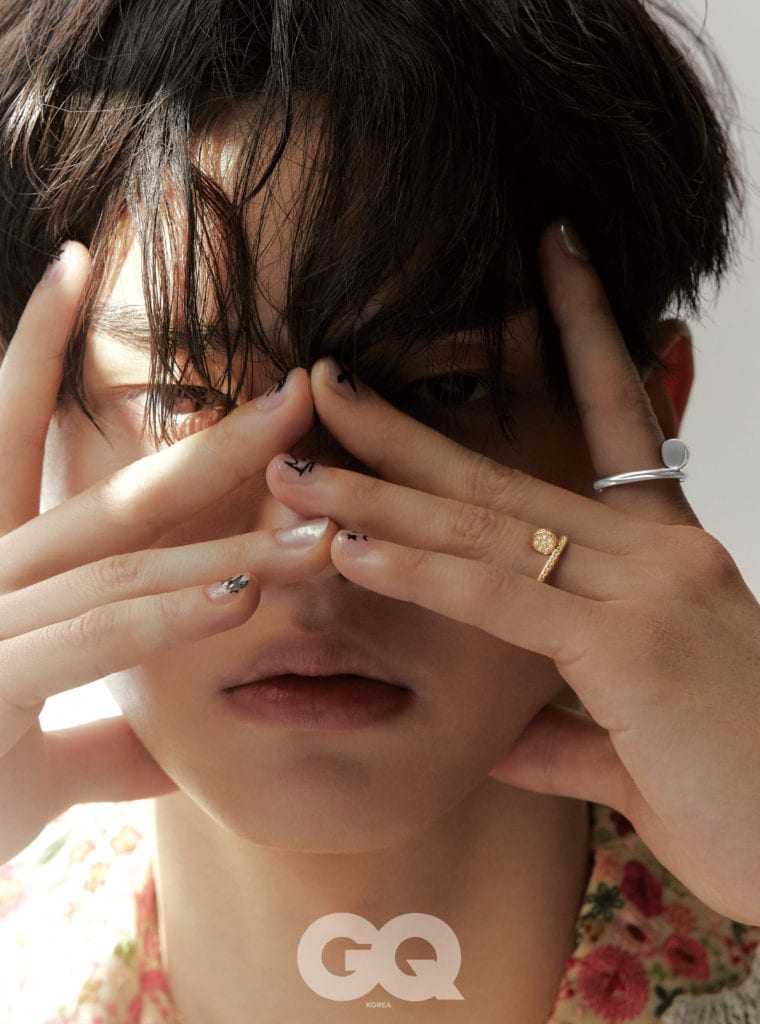 In many of his interviews, Song Kang has explained how much he enjoys jotting down little notes. These days, he shared that he writes down fascinating experiences he’s had. The actor commented, “Stuff like, ‘My emotions were so fascinating. When I was filming an angry scene, from a certain point onwards, my hands and body were shaking.’ I began to think that I was experiencing a lot of emotions while acting that I haven’t encountered in my everyday life. Because even if I’m not like that, I have to do it if it’s in the script. As I keep doing that, there are moments when fascinating emotions appear in my real life. It’s different from just acting. My mouth quivers, and my hands and feet start to tremble… I write stuff like this down. With the date and time.”

Finally, Song Kang was asked about what he strives to achieve. He answered, “Now, I don’t decide on a certain point to strive for. If I set a goal and set out to achieve it, but it doesn’t work out as well I wanted it to, I tend to get extremely depressed. Rather than that, I’ve changed my direction to try to enjoy every moment. If my philosophy in the past was ‘You must work hard no matter what,’ it’s now changed to be ‘Enjoy what you do and feel happy.’” 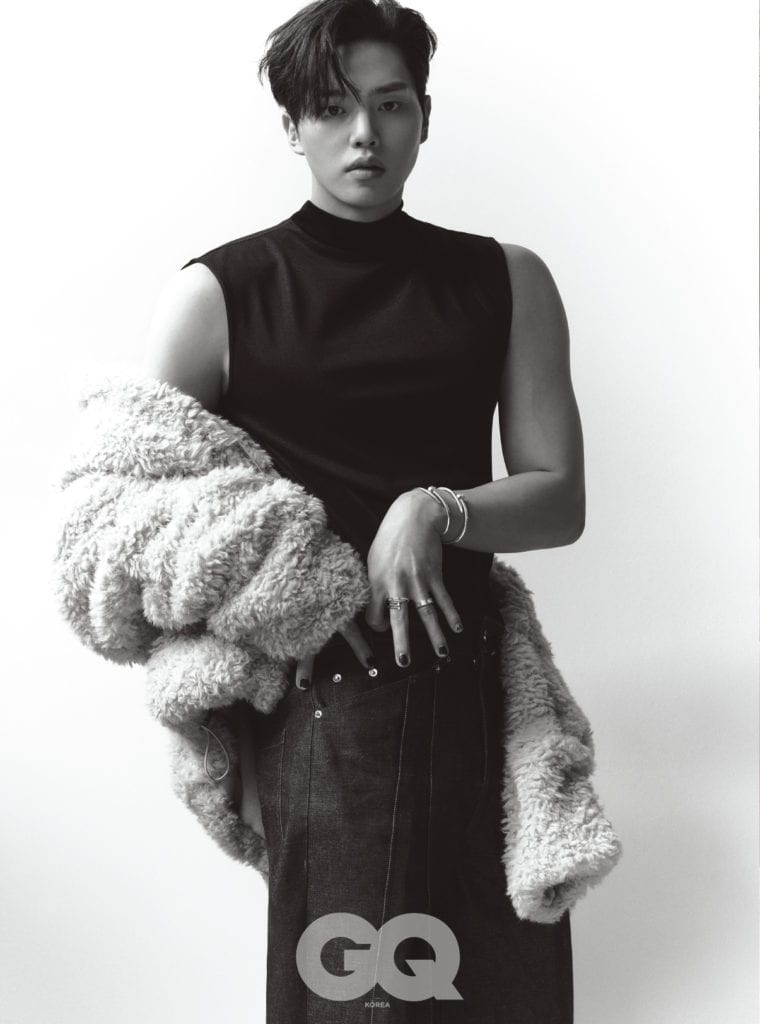 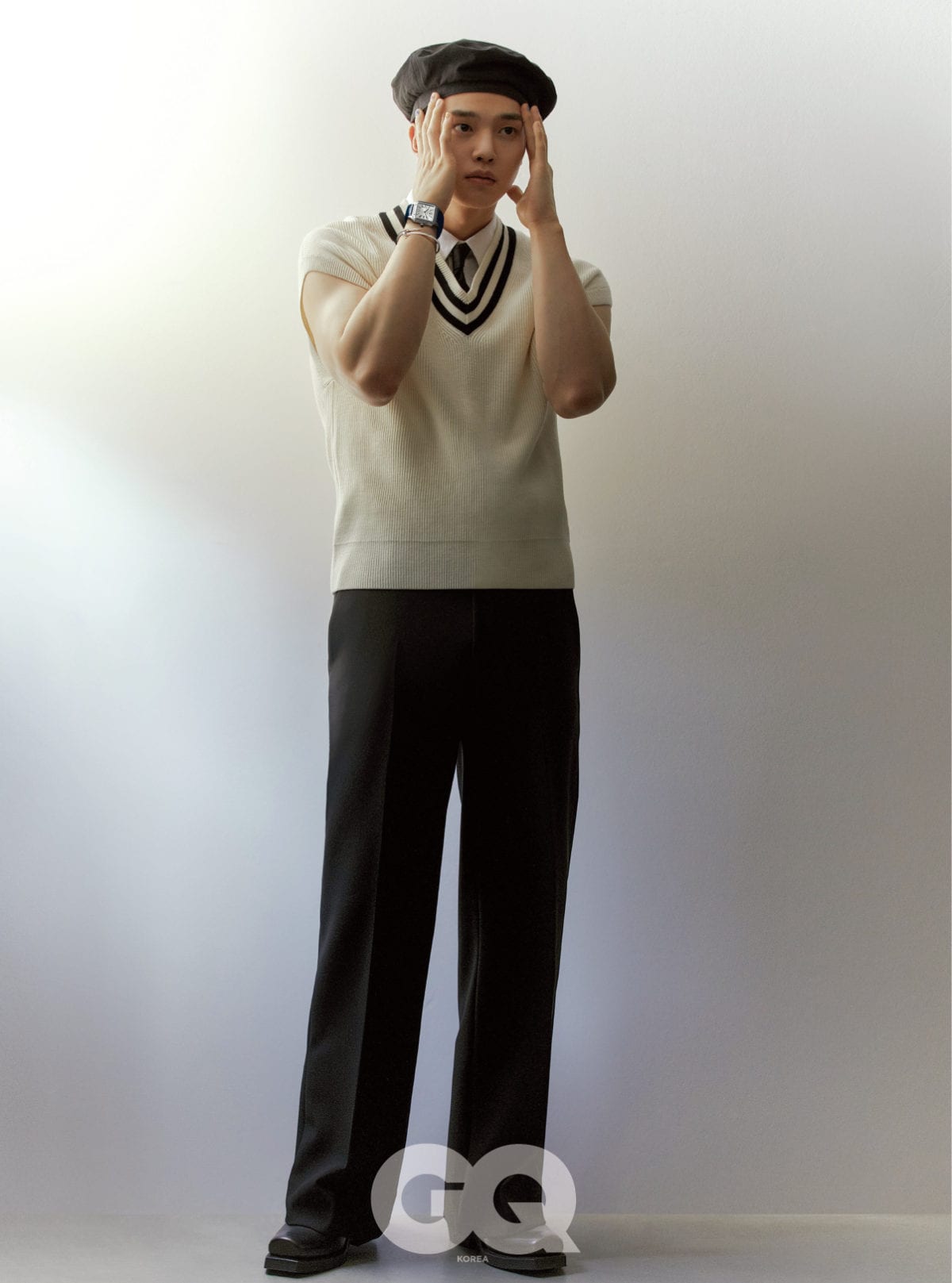 Watch Song Kang in “When the Devil Calls Your Name” below!

How does this article make you feel?

Thu Feb 24 , 2022
Artificial intelligence (AI) is an ever-growing technology that’s changing how businesses operate, and the support of AI-savvy IT pros has become critical. Here’s a look at two of the hottest jobs in the field. Image: Rick_Jo, Getty Images/iStockphoto The use of artificial intelligence (AI) is exploding across all industries, and […]