Temple Grandin’s memoir Emergence: Labeled Autistic, which chronicles the scientist and lecturer’s personal experiences learning and living with autism, completely shattered leading conceptions of autism when it was published in 1986.

Even though scientific writing on the developmental disorder existed, “back when Emergence came out, nobody else had done a book telling about themselves,” says Grandin, who splits her career between animal behavioral science and autism scholarship, noting that the diagnostic parameters of the time were both rigid and narrow. “The idea of ‘mildly autistic’ did not exist then,” she says, nor did an understanding of the sensory issues she first described in her  book.

That was then. Over the intervening decades, our understanding of autism spectrum disorder—which is estimated to affect one in 44 children in the United States—has vastly widened, as has our ability to support individuals living with developmental disorders. Grandin’s portfolio has also grown: since Emergence, she’s authored numerous books on neurodivergency (plus a handful on animal behavior and husbandry), including the New York Times bestseller The Autistic Brain: Thinking Across the Spectrum (Houghton Mifflin Harcourt, 2013).

She’s also garnered myriad accolades: in 2010, she was named one of Time magazine’s 100 most influential people. She also delivered a TED Talk that year, “The World Needs All Kinds of Minds,” about the need for neurodiversity, which has since garnered more than six million views. She has received multiple  honorary degrees and in 2016 was inducted into the American Academy of Arts & Sciences. She is also the subject of the acclaimed HBO film Temple Grandin, starring Claire Danes, who won an Emmy for her portrayal of Grandin.

On Friday, March 18, the author and advocate will speak at BU, hosted by Wheelock College of Education & Human Development and the Ivy Street School, a private school based in Brookline, Mass., that supports neurodivergent youth. In her talk, “Developing Different Kinds of Minds,” Grandin will discuss the importance of developing collaborative approaches to problem-solving and her latest book, Navigating Autism: 9 Mindsets for Helping Kids on the Spectrum (Norton Professional Books, 2021), written with psychologist Debra Moore. The event begins with a book signing at 6 pm at the George Sherman Union’s Metcalf Ballroom and is free and open to the public, but registration is required.

BU Today spoke recently with Grandin about her latest book, career advice for “when you’re weird,” and the importance of not letting labels stop you from succeeding in life. The interview has been edited and condensed for clarity.

BU Today:  Looking back on your groundbreaking book, Emergence, how would you describe its impact and legacy?

Temple Grandin: One legacy is one of the things I talked about that hadn’t been discussed before: sensory issues. Nobody understood sensory issues. I think that’s one of the biggest barriers that’s holding people back from doing things—loud sounds hurting the ears [for example]. Also, I think at the time, they didn’t think that autistic people even had any inner thoughts.

If you read [renowned developmental psychologist] Bernard Rimland’s forward to that book, he says that at that time, you had to have significant childhood speech delay to be diagnosed with autism. So the mildly autistic diagnosis, where there’s no speech delay—that did not exist at that time. There are all kinds of autism: for example, Elon Musk is autistic, but Asperger’s didn’t come in until later. What’s happened since the book’s release is the [medical community] broadened the diagnosis. So now people that might have been considered “slightly geeky” and never diagnosed as autistic previously are now diagnosed.

BU Today: Tell us about your latest book, with Debra Moore, Navigating Autism: 9 Mindsets for Helping Kids on the Spectrum. What do you hope readers get out of it?

Temple Grandin: That book is aimed at new parents, new teachers, and new psychologists to try to get them to view autism differently. One of the big problems we’ve got right now is what Debra Moore calls “label locking,” where kids are just getting locked into the labels and becoming their label. A lot of parents are overprotective of their kids or think they can’t do anything. As a result, I’m seeing too many austistic kids who aren’t learning basic life skills, like shopping, or job skills and are just shunted into nowhere. They end up addicted to video games and living on disability checks, when they should be designing airplanes or doing graphic design or some other interesting career. I think it’s a huge problem.

I want kids to get out there and do everything they can do. There’s also a whole chapter in the book about getting kids out in the real world. I like what Stephen Hawking had to say about disability in a New York Times article. He said something like, “Concentrate on those things you can do. Your disability does not prevent you from doing well.” Recently, a dad came up to me at an airport and told me about his son who is autistic and does every ground-support job for a major airline—fueling, deicing, and marshaling planes. He absolutely loves his job, and the airline loves him. That’s the kind of stuff I want to hear.

BU Today: For teachers, what kinds of accommodations can they make in the classroom to help autistic students succeed?

Temple Grandin: For one, a little extra time on tests. And if a kid trashes a quiz, approach them first because they might not ask for help soon enough. Another accommodation is if a kid can’t take notes fast enough, provide written bullet-point instructions. You see, I cannot remember long strings of verbal sequence; I simply cannot. Don’t write the instructions as narratives; make it like a pilot’s checklist—each bullet point will act as a key to jog the memory.

Then there’s paying attention to sensory triggers like lighting and noise. Let’s say a student doesn’t like the sound of a chair scraping the floor—cut tennis balls in half and put them on the chair’s legs so it doesn’t make noise. Or if a kid is afraid of the school bell, sometimes you can help them get over that. Take them down to the office when school is closed and let them press the button for the bell repeatedly; sometimes when they can control the trigger, they can be desensitized to it.

BU Today: You’ve made a name for yourself in two worlds: in autism advocacy and scholarship as well as in the field you earned your doctorate in, animal behavioral science, which you teach at Colorado State University. How do you juggle your dual passions?

Temple Grandin: You know, at one point in my life, I was just doing the animal stuff. Now I make room for both, but the animal stuff comes first for me. I’ve made a point of not letting my autism work totally take over my life, because I think that makes me a better role model. Because that’s what’s made life satisfying for me, having an interesting career. I’m seeing too many young kids getting so hung up on their autism to the point where they don’t have any other passions. That’s a problem.

You need to try stuff. I talk a lot about that with my students. I say, “It’s a big university—go get involved with a research project.” When you try different things, you find out what you like. You may also find what you hate to do, and that’s important, too. You know, there are a lot of students whose parents forced them to become a lawyer or a doctor and [it turns out] they despise the profession, right? They’ll want to be a veterinarian instead, and so I’ll go, “Go shadow a veterinarian and make sure that’s what you really want to do.” I’m a big proponent of trying on careers, and I’ll tell that to any student, [autistic or not].

BU Today: Any other career advice?

Temple Grandin: When you’re weird, you have to sell your work, not yourself. Make a portfolio. I started out showing a portfolio of pictures of my hand-painted signs [from my sign-making business]. And then that morphed into drawings and pictures of humane cattle-handling facilities [that I designed]. So an interview was “lay the portfolio on the table,” and that’s how I sold jobs. The other thing is, don’t show it to Human Resources. Get that work in the hands of the engineering department or the people who would appreciate it. At times, I’d find out someone was building a new cattle plant, and I’d just send my big, two-by-three-foot handmade drawing to the engineering department and they’d go, “Wow, we’ll hire her!”

And your portfolio has to be neatly presented. I call it the “30-second wow”: you want something where somebody looks at it and goes, “Wow,” in less than 30 seconds. It could be computer programming—don’t send a whole book full of it. Send paragraphs of some of your best code, best math, neatly presented with titles and labels. And get it into the hands of the people who will really appreciate it.

Temple Grandin will discuss “Developing Different Kinds of Minds,” at the George Sherman Union Metcalf Ballroom, 775 Comm Ave., at 7 pm Friday, March 18. Prior to her talk, at 6 pm, and following her talk as well, she will sign copies of her book Navigating Autism: 9 Mindsets for Helping Kids on the Spectrum. The event is free and open to the public. Register here.

Sun Mar 20 , 2022
London creative agency Brothers & Sisters recently announced that it had formally become a non-profit. Founder and chief creative officer Andy Fowler explains why. “‘Is your kind of profit the kinder kind of profit?’ said the wise old prophet.” That’s a line from the film we made to announce that […] 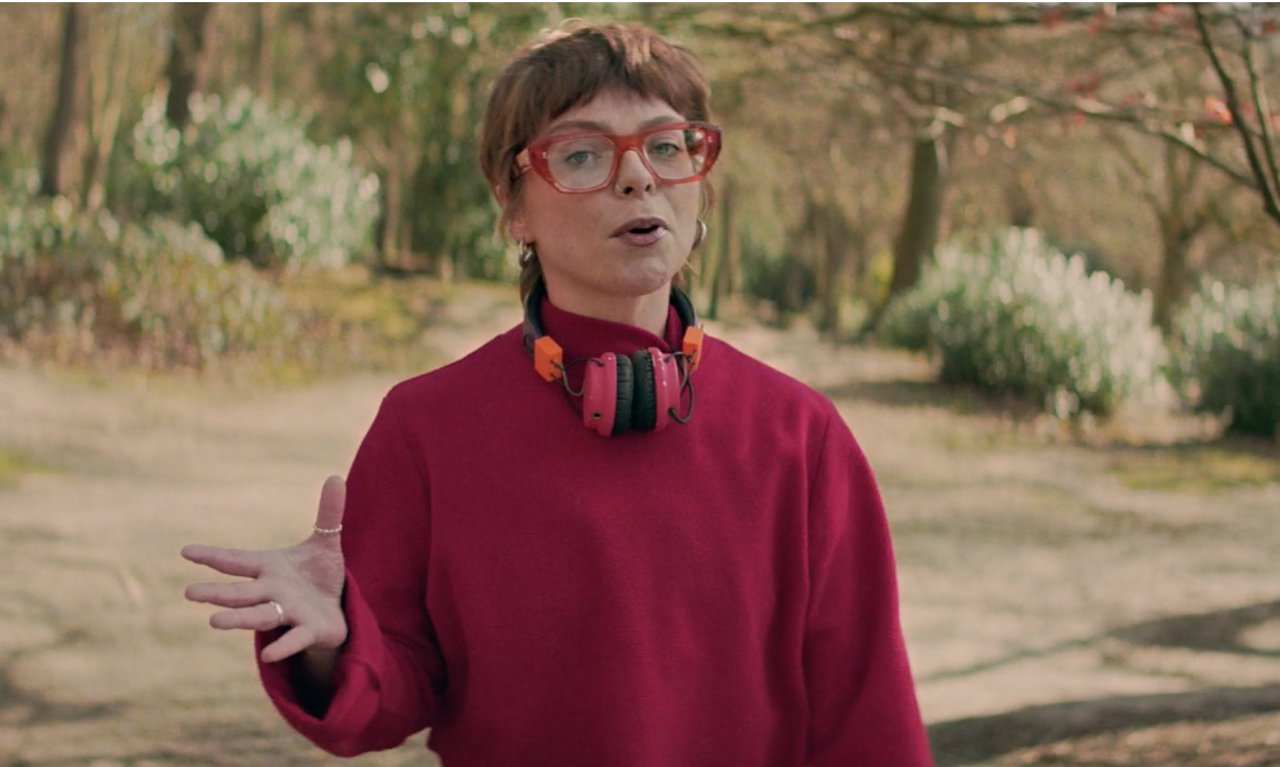