LAS VEGAS (AP) — It was the 1990s, and it would have been legal for Tara Clark Newberry’s police academy supervisors to fire her if she honestly answered the trainee’s pointed question.

“He turns to me and goes, ‘How do you know so much about gay people?’ ” she recalled recently.

“I said, ‘You know what, I’m just going to be who I am, and it’s their problem if someone else doesn’t like it,’ ” she told the Las Vegas Review-Journal.

In a recent interview with the Review-Journal, the 47-year-old said she hopes for a day when her firsts are no longer notable.

“When we get to the point where there’s no more firsts, we all just get to be regular people,” she said. “And I think that’s really everybody’s goal. I’ve never looked at it as: ‘I want to be special.’ It’s that I don’t want to be excluded.”

Clark Newberry was 21 when she enrolled in the Cincinnati Police Department’s academy. She wasn’t planning on coming out, especially while Cincinnati still had a city law that allowed the firing of LGBTQ people.

It was during the academy’s diversity training that Clark Newberry said she couldn’t keep quiet. She raised her hand again and again to correct an insensitive comment or offer her opinion, until her classmate asked his question.

“I paused and I said, ‘Well, I’m a lesbian, and I hope you guys all can deal with that,’ ” she said. “You could feel the oxygen suck out of that room faster than probably a bomb going off.”

She expected to be fired when she was called into her sergeant’s office the following day. Instead, the sergeant demanded that she let him know if anyone treated her differently.

Clark Newberry continued working as a police officer for eight years, until health problems forced her to find a new career. By then it was the early 2000s, and she wanted to live in a state with more protections for LGBTQ people, in order to one day have a family of her own.

She followed some of her colleagues’ advice and set out to become a lawyer. She graduated from California Western School of Law in San Diego in 2006, and moved to Las Vegas when a law firm recruited her. She only planned to live in Nevada for five years.

Instead, Clark Newberry built a career as a trial attorney, practicing civil law in areas including bankruptcy, debt defense and real estate. She’s served as a mediator for Nevada’s foreclosure mediation program in District Court and for U.S. Bankruptcy Court. She completed pro bono work with the Legal Aid Center of Southern Nevada and Nevada Legal Services, and spent time representing LGBTQ couples looking to adopt.

Ten years ago, Clark Newberry again opened herself up to scrutiny when she and her now-ex-wife joined seven other couples as plaintiffs in a lawsuit challenging Nevada’s ban on same-sex marriage. Clark Newberry said that as a member of Nevada’s legal community, she felt she had a “moral obligation” to challenge the law.

“If you have the ability to help someone, you should,” she said. “And I think that was kind of the way I saw it, is this is a huge problem and I had the ability to do something about it.”

Clark Newberry said it was remarkable how much public opinion has shifted in the decade since. When her children were younger, hospital staff would ask condescending questions about which of their parents was the “real mom.” Now, her children’s peers don’t think twice about their family.

“It’s like you see this progress and development that’s occurred, and it felt like it was on a very steady trajectory,” she said. “And then between the late ’90s and the mid-2000s, boy, that trajectory has just shot up. And it’s just continued to do that.”

Clark Newberry said she became a judge because she loves learning about the law. She won the election in November 2020 for the District Court seat after running against attorney Jacob Reynolds.

District Judge Tierra Jones, who handled cases with Clark Newberry and served as her mentor during her first year on the bench, said she has one of the most well-organized caseloads in District Court.

“She’s always that person who always makes herself available whenever there’s any need, as far as the court system goes,” Jones said.

“I think the diversity that is being brought to the bench currently is very important,” she said. “It just helps to provide those different perspectives, because the bench needs to reflect the community.”

In March, Southern Nevada’s LGBTQ Chamber of Commerce, the Lambda Business Association, invited Clark Newberry to speak at the organization’s monthly luncheon in honor of Women’s History Month. Clark Newberry, who was a history major in college, spent most of her 20-minute speech outlining other firsts in the Nevada legal community.

Pam Jones, a Las Vegas attorney and member of the association’s board of directors, said watching Clark Newberry get elected and hearing her speak during the luncheon brought tears to her eyes.

“I’m proud,” she said. “I’m proud of our community for supporting her. I’m proud of her for leading the way.”

Pam Jones is not related to the judge with the same last name.

Clark Newberry told the luncheon crowd that she was only able to be the first openly LBGTQ judge elected to District Court because of the colleagues who paved the way for her.

“I certainly hope that I am not the last, and I hope that I continue to hold the door open for many others to come along,” she said.

Copyright 2022 The Associated Press. All rights reserved. This material may not be published, broadcast, rewritten or redistributed. 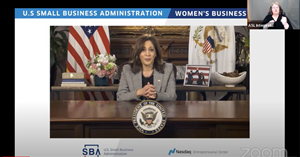