Start every business day with our analyses of the most pressing developments affecting markets today, alongside a curated selection of our latest and most important insights on the global economy.

As the global economy experiences the ripple effects of the Russia-Ukraine conflict, international banks are disclosing their exposure to Russia and weighing the implications of sanctions on their operations.

The sanctions implemented by the U.S., EU, and other major economies on the Central Bank of the Russian Federation and those removing Russia’s major lenders from the Society for Worldwide Interbank Financial Telecommunications (SWIFT) messaging service on March 2—and market participants’ subsequent concern about their exposure—has effectively cut the country off from the global financial system. While the direct effects of the SWIFT sanctions will likely be limited and manageable for foreign banks, S&P Global Ratings believes that banks outside of Russia may be unwilling to risk their compliance and operational standing by interacting with those banks sanctioned from SWIFT.

Some foreign banks with operations in Russia have expedited efforts to de-risk their operations and are confronting the possibility of losing their investments in the country, while Russian lenders face the risk of a liquidity squeeze due to the Russian central bank’s lacking access to its foreign exchange reserves, according to S&P Global Market Intelligence. While some European banks have notable exposure to Russian entities, others—and banks elsewhere in world—have limited direct exposure.

“Thus far, we have taken negative rating actions mainly on financial institutions in Russia, Ukraine, and Belarus, with many of them linked to our downgrades of the sovereigns and our view of the deteriorated operating environment,” S&P Global Ratings said in a report yesterday. “We continue to closely monitor any potential rating effects on these [European and global] institutions, but we remain mindful of the modest materiality in terms of the groups’ total exposure and the ample local deposit funding of the subsidiaries, which historically has held up well in previous times of stress.”

Austria-based but majority-owned by the Russian government Sberbank Europe failed due to deteriorating liquidity on Feb. 28, a consequence of the sanctions implemented on its parent company and resulting loss of depositor confidence. Large institutional investors worldwide may now face billions of dollars in stock losses due to its collapse of its parent, Sberbank, according to S&P Global Market Intelligence data.

Four European banks rated by S&P Global Ratings—Austria’s Raiffeisen Banking Group, Hungary’s OTP Bank, France’s Société Générale, and the Italian banking group UniCredit—have sizable but varying Russian and Ukrainian exposures, and all are expected to be resilient during this period of uncertainty and volatility, according to S&P Global Ratings. Still, major European banks are unlikely to reserve significant provisions in the near-term due to the conflict.

An S&P Global Market Intelligence analysis found that as of late last year U.S. banks’ collective exposure to Russia was smaller than to countries like Finland. Similarly, another S&P Global Market Intelligence analysis showed that Latin American banks also have little to no exposure to Russian firms and financial instructions.

“The modest direct linkages are a legacy of a Russian economy that had become increasingly isolated even before the most recent hostilities, as sanctions imposed on Russia in 2014 after its annexation of Crimea forced foreign banks to pull back and Russia used trade surpluses to build up an enormous, defensive stockpile of foreign reserves,” S&P Global Market Intelligence said in a recent report.

“In my experience, the moment some Russian banks are sanctioned, and the moment you have two, three, or more sets of sanctions regimes which are similar but different, the reaction of, at the very least, the Western European and American banking system will be, ‘we will not touch Russian banks full stop, and we will not touch Russian trade full stop,'” Nigel Kushner, chief executive of the law firm W Legal, told S&P Global Market Intelligence.

Some of Wall Street’s biggest banks—namely the investment banking multinational Goldman Sachs and largest U.S. bank JPMorgan Chase—announced earlier this month that they are “winding down” their businesses in Russia in compliance with regulatory requirements. Deutsche Bank announced similar action, reversing course on its previous plans to maintain operations in Russia.

Today is Thursday, March 24, 2022, and here is today’s essential intelligence.

—Listen and subscribe to Fixed Income in 15, a podcast from S&P Global Ratings

In this month’s episode of Capital Markets View, Taron and Chris discuss the impact that the Russia-Ukraine conflict continues to have on the leveraged finance market, including secondary market trading activity, the limitations on primary market activity, and what pricing and leverage might look like when the market reopens as there is still a large pipeline of deals waiting syndication in the forward calendar. 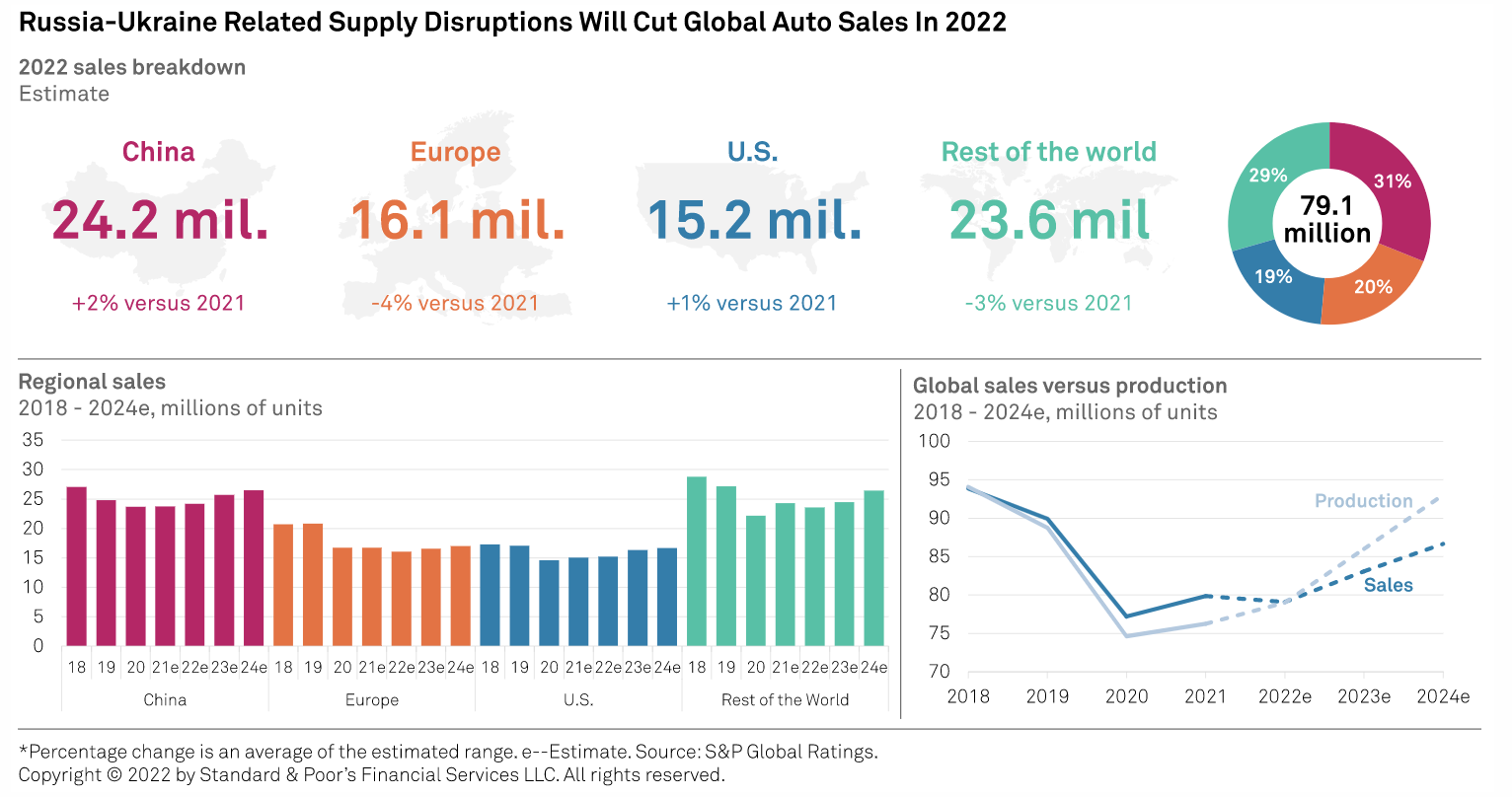 The Russian invasion of Ukraine and the related economic sanctions represent a threat to a scenario of mild recovery of global light-vehicle production in 2022. The economic consequences of the war in Ukraine are adding to ongoing supply-side risks related to the shortage of semiconductors, which intensified for the global auto industry in the second half of 2021. S&P Global Ratings now sees a material threat to its previous base case for moderate growth in sales and production this year and has revised its estimates downward. S&P Global Ratings projects global sales will decline by up to 2% in 2022 on last year compared to its projection in October last year of a sales rise of between 4% and 6% for 2022. 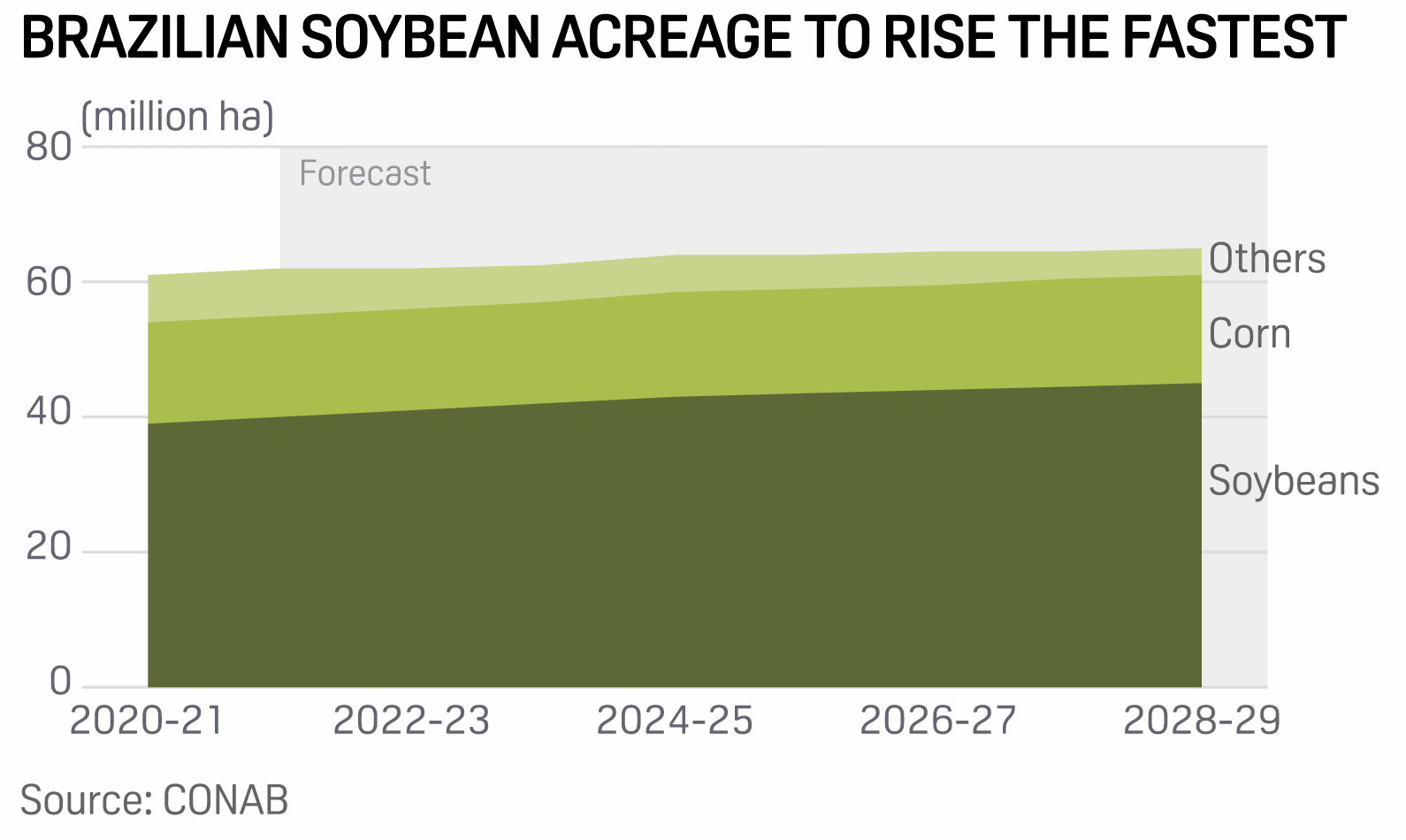 The rapid expansion of soybean farming in Brazil over the past decade has catapulted the South American nation to being the world’s biggest producer and exporter of the oilseed. According to the Ministry of Agriculture, Livestock and Supply in crop year 2011-12 (September-August), Brazil produced 66.5 million mt of beans, well behind 84.3 million mt of the U.S. By 2017-18, Brazil surpassed the U.S. and became world’s premier beans producer at 123.4 million mt. In just the last decade, soybean acreage in Brazil expanded from roughly 25 million hectares in 2011-12 to nearly 40 million hectares in 2021-22, an astounding growth rate of 60%. Most analysts attribute the surging soybean prices as the primary factor in the beans acreage expansion in Brazil. 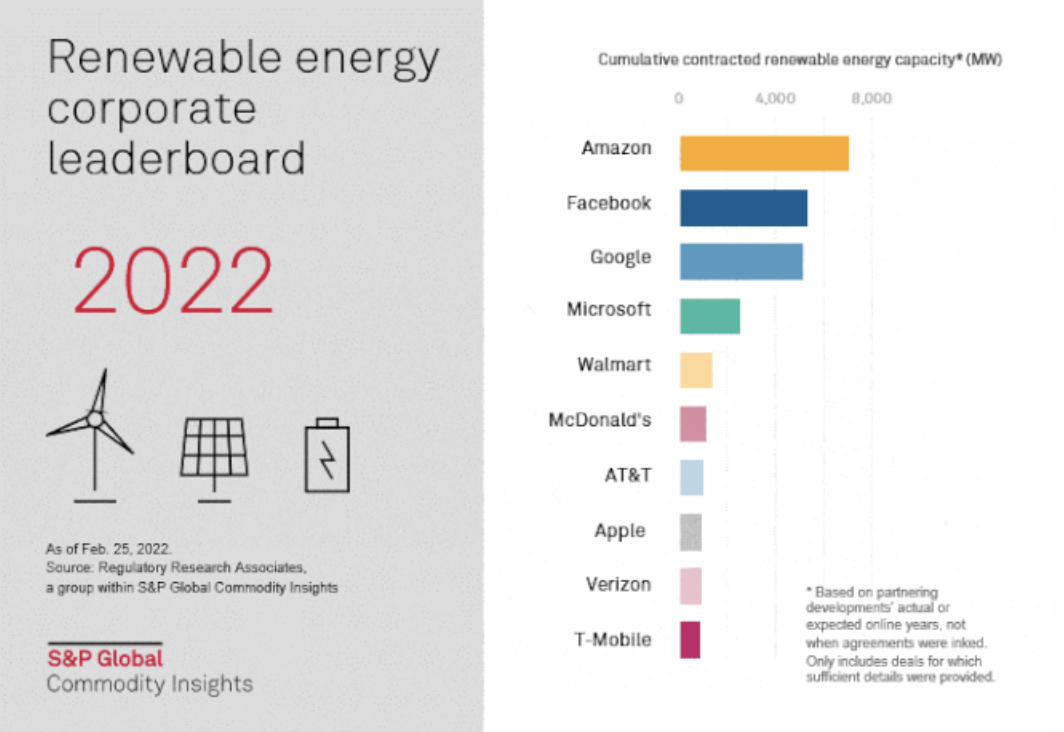 Big Tech dominates the corporate renewable energy space as contracted capacity approaches 60 GW. The evolution of the top 10 U.S. corporations by cumulative capacity, which account for nearly 60%, or 34.9 GW, of the total tracked by S&P Global Commodity Insights, shows Google (Alphabet Inc.) long occupying the top spot, before relinquishing the corporate-tied renewable energy crown to Amazon.com Inc. after 2021. This analysis relies on partnering developments’ actual and expected online years, not when inventoried agreements were signed. For instance, Amazon’s contracted renewable energy capacity comes in at a cumulative 1.5 GW via projects that came online through 2020. 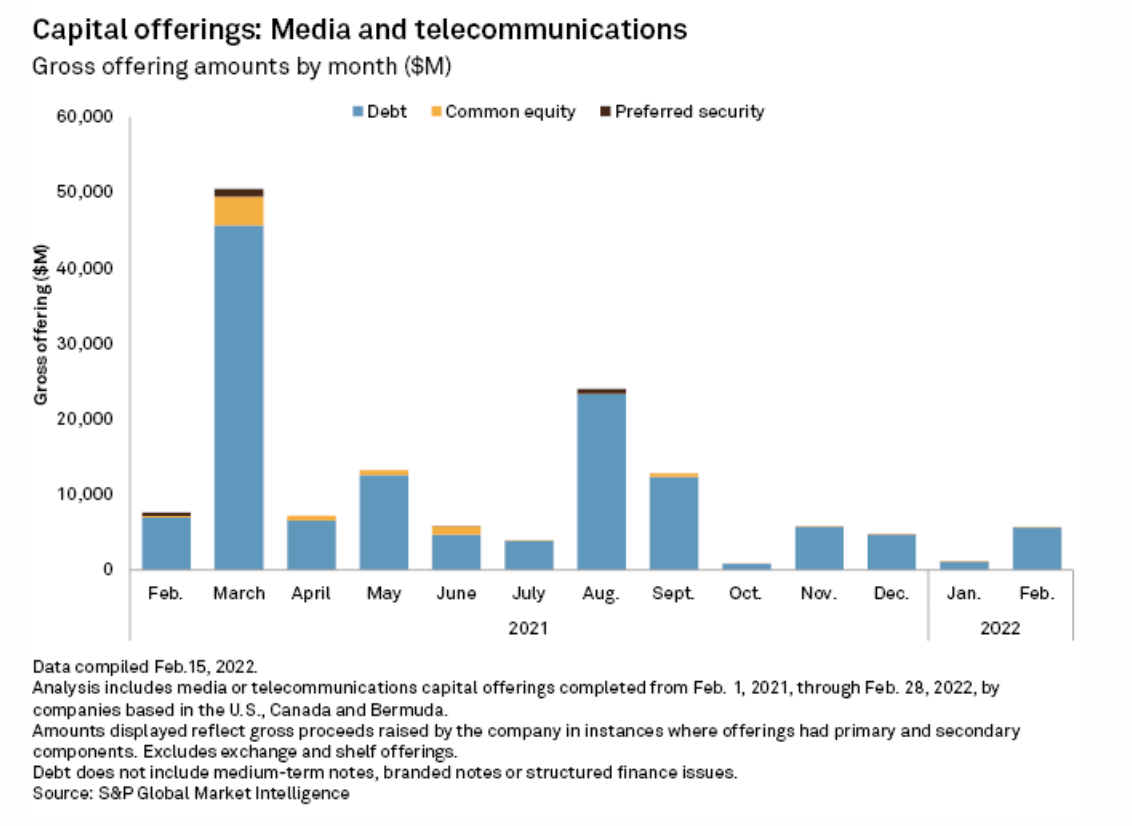 Capital markets activity in publicly traded media and telecom companies in the U.S., Canada, and Bermuda brought in a total of $5.71 billion in February 2022, according to S&P Global Market Intelligence data. Senior debt offerings accounted for the majority of the raise, at about $5.70 billion, while common equity offerings brought in $11.6 million. That compared to a total raise of about $1.21 billion in January. Telecom companies took over the top two spots for the largest capital raises for the combined sectors year-to-date, with Charter Communications Inc. unit CCO Holdings LLC raising $1.2 billion from an offering of its senior unsecured notes and Verizon Communications Inc. bringing in $1.0 billion from a senior debt offering.

Divorce If You Have a Reverse Mortgage